Time for another art shirt

It started at a dinner party last year. I was wearing my Singing Butler shirt and people were asking questions about it. My partner’s boss made a remark along the lines of “if I’d ever get a shirt like that, I’m sure it would be of the Dogs Playing Poker.” And so a challenge was started.

You see, this boss is a very conservative guy when it comes to clothes. Slack and sports jacket, maybe jeans and a sports jacket on Friday. My partner and I decided that this would be a great practical joke.

I didn’t really think this would be a art shirt, that painting is not something you think of when discussing art. Then I started to research it a bit and found out that it is actually a series of paintings, and some of them have recently been sold for well over half a million dollars. So I’m going to keep referring to this as an art shirt, even though it really was started as a prank.

I wasn’t going to spend too much time on making this a perfectly executed shirt, since it probably wouldn’t be worn very much. And it had to be a surprise. So with the help of his wife we took one of his shirts while he was on a business trip and took some measurements. With those I adapted a pattern a bit and started the design of the fabric.

We decided that there wasn’t really anything smart and funny we could do with the arms. So those would be made of a different, solid coloured fabric.

That just left the back and the front to be made out of panels cut of the painting. To get a better distribution, I compressed it horizontally somewhat.

I did want to do something fun with the collar. So I found some photos of cards, tweaked, mirrored and shaped them somewhat. It could work, or I could use the fabric for the sleeves if it didn’t.

And after some weeks of waiting, the fabric came. 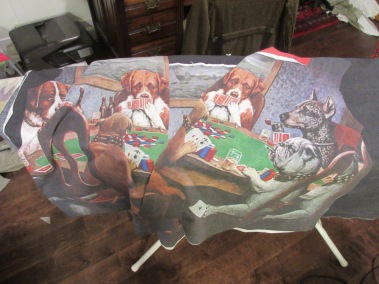 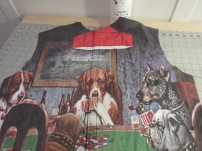 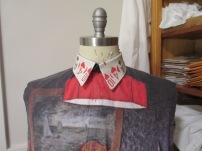 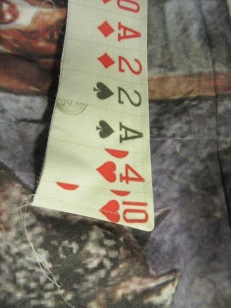 I was going to take more photos of the shirt by the person actually wearing it. But when my partner gave it to him for his birthday, he actually took the packet home and didn’t open it until there. Apparently, he has worn it for his wife and she liked it. I haven’t seen it other than on a bad mobile phone picture. So here is the only photo I have of the completed shirt (sans burttons):

One thought on “Dogs”